Report on the FoI Requests on Zero Hours Contracts

The key findings of the EIS survey include:

• Most Colleges had not (as of 01 August 2013) carried out Equality Impact Assessments into the use of zero hours contracts.

• A few Colleges give minimal rights under law to their zero hours contract holders and define them as "workers”. These Colleges do not pay occupational sick leave nor occupational paternity and maternity benefits. The EIS believes that these Colleges are seeking to avoid their responsibilities as employers to these zero hours staff- many of whom may have worked for the College  for years. (Examples: Ayrshire College, Dundee College, North Highland College, Forth Valley College, Edinburgh College – Granton Campus.

• Most Colleges stated that they give payment in lieu of holidays (i.e. rolled up holiday pay) – with a number also offering paid leave as an option. The EIS believes that this practice is unlawful as it means that zero hours contract holders do not receive 28 days (pro rata) of paid time off and Employers should only pay staff in lieu of holidays upon termination of their contracts. The EIS also believes that Employers must pay their employees at the time they take their leave. (https://www.gov.uk/holiday-entitlement-rights/holiday-pay-the-basics).

• Most Colleges give zero hours contract staff the same holiday entitlement (albeit as payment in lieu) as permanent employees – the highest being 30%. Some Colleges give zero hours contract holders the statutory minimum 28 days pro rata (8.3% (i.e. the minimum stated by the Working Time Regulations). This means that some zero hours staff are receiving between 8.3% and 30% holiday pay – depending on which College they work at.

• No College uses "exclusivity clauses” within their zero hours contracts – which is good news from the EIS FoI request.

• Only one College has a zero hours contract complaint/appeal process and all seem to rely on grievance procedures.

• Most Colleges apply their disciplinary policies to cover periods between work as well as during work. This could lead to a zero hours contract holder being disciplined in September for breaching a Colleges policy despite not working since the preceding October. 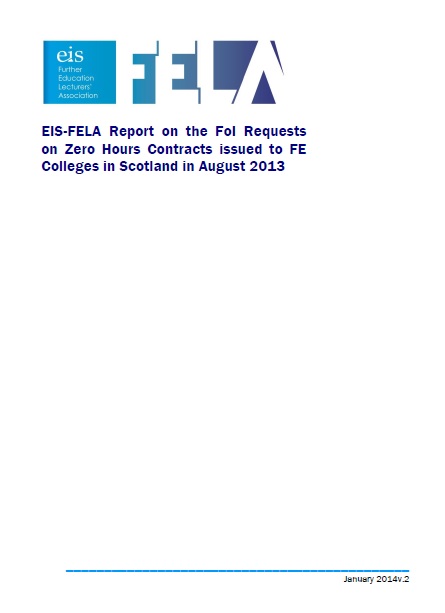