Following successful industrial action by EIS members in response to assessment-related workload in the senior phase, mandatory unit assessments are being removed from N5, Higher and Advanced Higher Qualifications on a phased basis from August 2017.

The Assessment and Qualifications Review Group on March 31st, issued advice on the changes to local authorities, schools and teachers.

The EIS has a clear view that these decisions should have been made much earlier in the session and communicated to schools timeously.

It is over 6 months since agreement was reached on the removal of units and the implications of those changes have been known since last September.

It would seem that the simple lesson from the introduction of the new qualifications, that schools (parent, pupils and staff) need time to adjust to changes has yet to be learned.

This advice is relevant to Secondary members who are teachers, Faculty Heads and PTs of En ...

Since the Spring, the EIS has continuously called for a decision to be made regarding the ...

Advice in light of the increased demands on teacher time to make adjustments to course pla ... 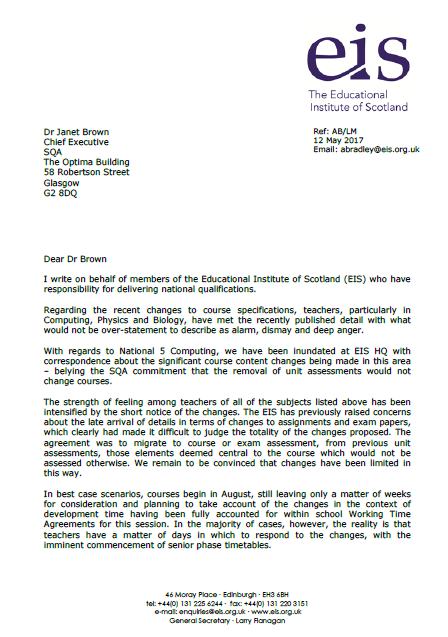 Regarding the recent changes to course specifications, teachers, particularly in Computing ...

Commenting on the interim changes to National 5 Qualifications, announced today by Deputy ...

A selection of Frequently Asked Questions relating to the changes to the National Qualific ...

Changes to the National Qualifications

It is becoming clear that a degree of confusion remains with regard to the implications of ...