The poem contains a lot of reference to people and organisations that were involved in the campaign. These footnotes should help you understand to who’s who and who did what.

During 1999/2000 and for a few years after under a Labour government, the Home Office introduced the ‘Dispersal Scheme’ which meant that asylum-seeking families were sent around the UK to ‘relieve’ social and political pressure in the south of England. Families arrived In Scotland with very little and were expected to pay for food by using vouchers that they were given by the government rather than money. This practice was brought to an end after public criticism of it for being embarrassing and degrading for the people having to use vouchers in the shops instead of money. 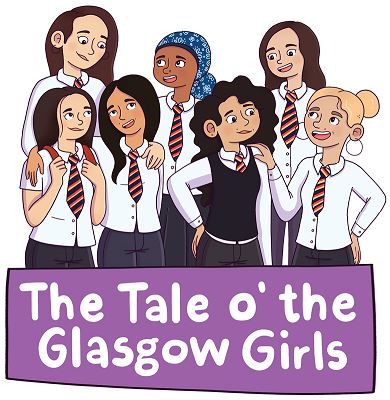 Traumatised children received counselling and support from experts from The Haven Project, sponsored by the charity ‘Action for Children in Conflict.’ Dr Christine Puckering, Consultant Clinical Psychologist, Royal Hospital for Sick Children and Dr Aileen Blower, Lecturer in Child Psychiatry, Yorkhill Hospital, both came to the aid of children, helping them find a way out of the trauma they had suffered.

The late Richard Morran, Ann McFarlane and Frances Hume worked tirelessly for Save the Children engaging young people from a wide range of communities and developing their creativity through music, film-making and activism culminating in the short film ‘Unjust Treatment-Detention of children in Britain’(2008) as part of the ‘No Place for a Child Coalition’ to end child detention in the UK.

Aileen Ritchie came to us as a Glasgow City Council writer-in-residence with young asylum seekers. Her empathy and commitment to drama work with children and young people led to her setting up the Knightswood Youth Theatre which has now matured into Ignite Theatre, a charity free to young people in Glasgow to develop a wide range of skills through drama. Aileen is Ignite’s Creative Director.

Ninian Perry, Claire Docherty and Noel Bridgeman from the Paragon Ensemble encouraged composition and performance from Drumchapel High school pupils that led to a performance with the classical ensemble called ‘Challenging Peace’ in a concert celebrating the birthday of Martin Luther King.

The Carnival Group was an extra-curricular activity group that took pupils out into the wider community to celebrate the diverse cultures in the school by developing their skills in dance, music, performance and the creative construction of costumes.

Saddam Hussein was President of Iraq from 1979-2003. In coming to power, he suppressed the Kurdish people who wished to gain independence from Iraq. Key members of Roza’s family were killed as a result.

In the poem ‘To a Mouse’  by Robert Burns, the ploughman accidentally turns a mouse out of its nest, making it a refugee.

Social media was in its early stages. The Glasgow Girls campaign was mainly conducted via email, letter, phone and the mainstream media. Facebook had launched in 2004 but the girls opted in 2005 for the now unused Bebo as they charted the internet. Twitter launched in 2006.

David Starkey is a right-wing historian.

Dungavel Detention Centre, a former prison- is situated outside Strathaven. There have been many campaigns to shut it down. 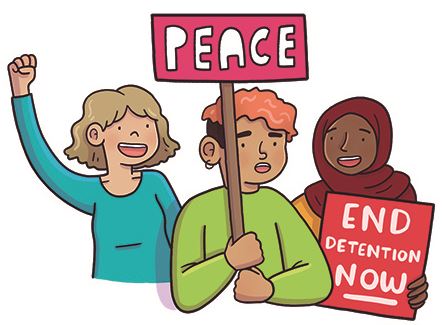 Kingsway Health and Well-Being Centre at the bottom of one of the high rise flats in Drumchapel became a hub for refuge, advice and meetings and was run by Martin Coyle , Co-ordinator, and Jassim Johe, Asylum Development worker. The Kingsway Women’s Group, and the Kingsway Amnesty Group were set up here with Jean Donnachie and Noreen Real helping to lead. Both women spoke out against the actions of the Home Office and the UK Border Force. They won ‘Scotswoman of the Year 2006’ for their service to the community.

Frank McMaster has been a life-long human rights and ecology campaigner, gardener and more recently a Bikeability trainer in the West End of Glasgow. A former pilot, Frank is well-versed in tracking flights.

Lindsay Hill is an inspirational independent film-maker and producer who when working for the BBC helped film and produce a ground-breaking series on children’s issues called ‘Tales from the Edge‘ in which young people told their own stories in their own words. Two films documenting the reactions and activism of the girls were made-the Amnesty International award winning ‘The Glasgow Girls’ 2005’, and ‘The Children Who Disappear’2006 which followed the Glasgow Girls taking their campaign to the Scottish Parliament. The subsequent National Theatre of Scotland musical,  ‘Glasgow Girls’ and the BBC Three film ‘Glasgow Girls’ were based on these documentaries.

The Glasgow Girls campaign visited the Scottish Parliament in Edinburgh on a number of occasions and persuaded the then First Minister, Jack McConnell to try to protect children from detention.

The campaign included presenting the document ‘Dawn Raids, Detention and Deportation, Statement of Pupils, Drumchapel HIgh School’ to the Scottish contribution to the UK Report to the UN Convention on the Rights of the Child in Edinburgh 2006

We were supported by, and supported, a wide range of organisations not mentioned here including The Scottish Refugee Council, Positive Action in Housing, Unity, The Refugee Survival Trust amongst many others. The EIS (Educational Institute of Scotland) is the biggest teacher trade union in Scotland. It has a long history of challenging racism and of standing up for refugees and asylum-seekers.