More Than £450,000 Compensation Paid to Scottish Teachers Injured at Work

The EIS has secured over £450,000 in compensation settlements for members injured at work over the past year.

The payments were awarded for a wide range of workplace injuries, including those caused by accident, assault or poor working environment.

Commenting, EIS General Secretary Larry Flanagan said, "It is never a pleasant task to report on the amounts of injury compensation that the EIS has secured for its members over the course of the year.

"While the EIS will always stand up for its members, and will pursue appropriate compensation for injuries suffered at work, our desire is to eventually report a zero figure for compensation in the future due to the elimination of these types of work related injuries.”

Mr Flanagan continued, "This year’s figure of over £450,000 in compensation for teachers and lecturers injured at work demonstrates that there is still a long way to go towards the aim of eliminating workplace injuries in our schools, colleges and universities.

"These environments will never be entirely risk-free, but it is essential that all facilities are as safe as possible for learners and staff alike.”

"The most common cause of injuries continues to be accidents such as slips, trips and falls. These are also the types of incidents that are entirely avoidable with correct adherence to appropriate health and safety procedures in the workplace.

Mr Flanagan raised concerns about possible changes to health and safety legislation in the near future as a result of Brexit and said, "Many of the valuable workplace protections that we enjoy today are the result of EU legislation.

"It is encouraging that the number of instances where teachers have been injured at work has decreased in the last year. This is testament to current Health & Safety regulations which must be retained following the UK’s departure from the European Union”.

Mr Flanagan added, "The EIS has also observed an alarming rise in the number of cases of work- related stress illness and injury claims over the past few years.

"Factors such as budget cuts, and the declining number of teaching and support staff have had a significant impact on the workload demands placed on teachers and lecturers.”

"Yet those in the charge of the management of the education system simply demand more output from less resource.”

"This is compounded by the fact that many teachers return to work when they clearly should be still be off sick, either from for fear of being disciplined because they will hit a sickness absence management trigger or more often to ensure that pupils are not losing out.

"This increases the incidence of work-related stress injury, which can be absolutely debilitating for the individuals concerned.”

Mr Flanagan went on to say, "At a time when the role of trade unions is increasingly being vilified by the current UK government and the right-wing press, it is important that we emphasise the valuable role that unions such as the EIS play in standing up for employment rights and the health and wellbeing of employees.”

"The EIS will continue to do all that it can to defend its members in an increasingly challenging political climate.”

Further information on some of the compensation cases handled by the EIS over the past year can be downloaded here. All cases have been anonymised. 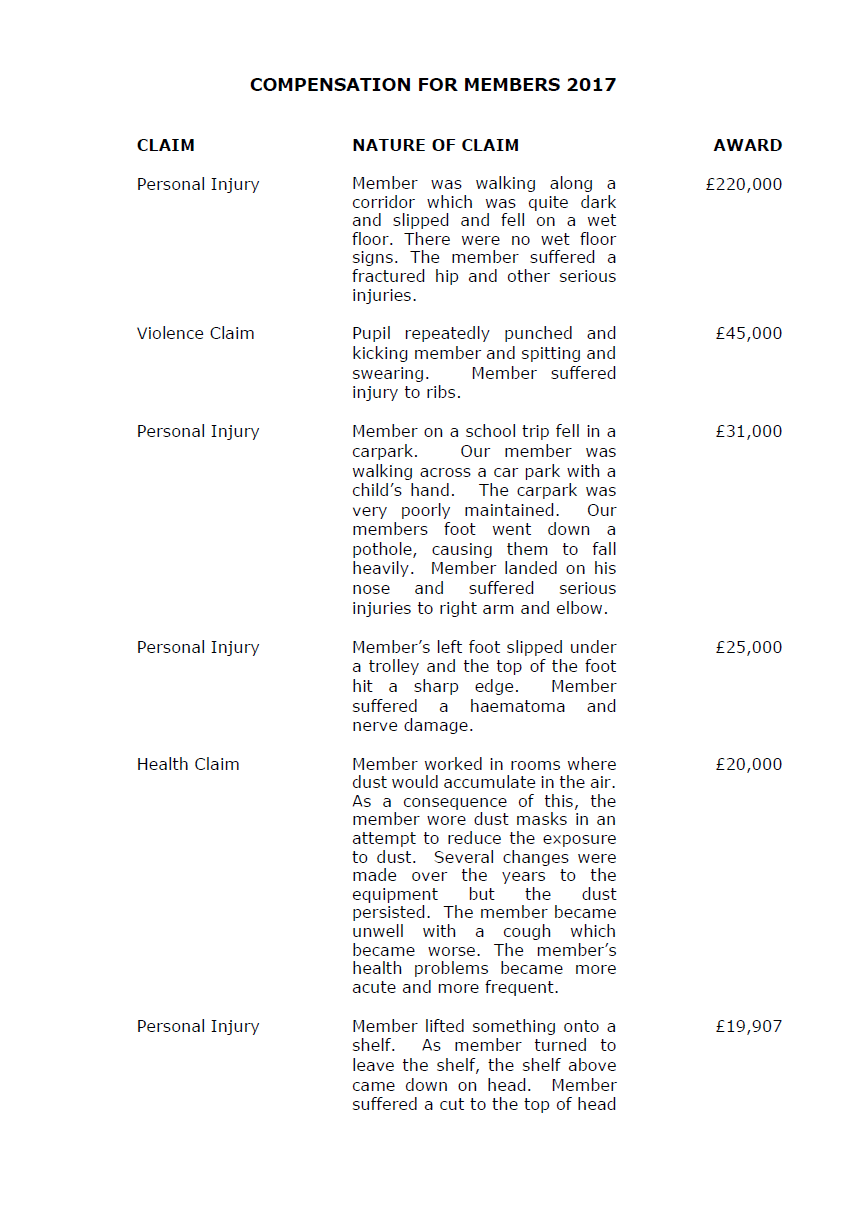